What Brexit Means for Automobile Industry

Tata Motors has been getting lots of attention in the market in relation to the Brexit event. The India-based company will be likely affected if the Brexit campaign prevails as 90% of the group’s profits come from the British luxury car unit Jaguar Land Rover (JLR). For now, the foreseeable risks in case of a Brexit to Tata Motors’ operations in the U.K. are declining sales due to the possible tariff barriers, components sourcing from the EU as well as the movements of workforce within the region. JLR would have to prepare to see its annual profits severely hit following the event. 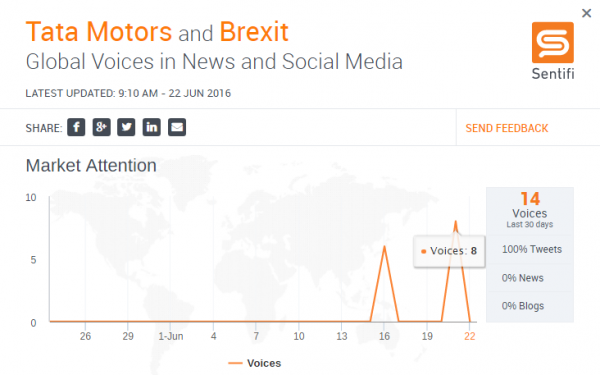 The case of Tata Motors has raised the question on whether the other car manufacturers in the Europe would be under the influence of a Leave vote. At Sentifi, Brexit is the most discussed political and societal event. BMW and Daimler are also among the most talked-about automakers impacted by the event.

The U.K. car industry is booming, with car production hitting the highest level in 10 years in 2015. According to the Society of Motor Manufacturers and Traders, the industry is heavily dependent on exports with 80% of cars produced in the U.K. are exported and more than 50% of those go to other nations in the EU. In this regard, Toyota, BMW and Vauxhall expressed their worries on the impact of Brexit on their British car production, especially Toyota when 75% of its made-in-UK cars are exported to the rest of the EU.

On the other hand, leading German carmakers like BMW and Daimler also see Britain as an important export market with global market share of 3%. The total number of cars sold in England was 2.6 million in 2015 compared to 78 million worldwide. Matthias Wissmann, president of the Association of the Automotive Industry (VDA), said the EU without the U.K. would “lose substantially in value.”

All 20 English Premier League clubs and car manufacturers including Toyota UK, Vauxhall and BMW among those endorsing remain today. #brexit

Boris Johnson: EU tariffs would be 'insane' if UK backs Brexit #VW are dearer in #UK than #Germany as #BMW #Mercedes https://t.co/dYWSRiOzJ2

Yet on the Leave side, Brexit backers put forward their argument that leaving the EU will boost the British car industry. “A vote to leave could provide a boost to the industry as we would be free to sign free trade agreements with emerging markets — something we are currently forbidden from doing by the EU,” said Vote Leave Chief Executive Matthew Elliott.

Besides concerns from global leading car manufacturers, the Sentifi Breifing widget has also caught an interesting message about the British luxury sports automaker Aston Martin. Its chief executive has addressed the consequence of Brexit on the pound, and that the British exports will eventually impact the company’s luxury cars.

With the pound being predicted to dive 20% if the U.K. chose to leave the EU, Aston Martin expects that their supercars can be regularly seen in the middle-class neighborhoods in the U.S.

The EU referendum will take place on June 23 and the Brexit Briefing still listens to 2.8 million relevant voices in the financial markets to give updates on the most affected economies, stocks, currencies and central banks in relation to Brexit.