The Current State of Unemployment Around the Globe

In January, the International Labour Organization (ILO) released a new World Employment and Social Outlook analysis report saying that global unemployment will be likely to rise in both 2016 and 2017. Emerging and developing economies have shown more vulnerability amid the unstable economic environment.

Lately, the financial crowd have been keeping an eye on the unemployment rate reports for the first quarter as well as in April around the world. By looking at the Unemployment topic at Sentifi, it is easy to catch up with the latest statistics from France, Australia, the United Kingdom, Hong Kong, Egypt and South Africa. Most of the reports show stable figures compared to the previous months.

French jobless rate remained unchanged at 10.2% for the first quarter although there was a significant increase of 50,000 jobs. The unemployment rate is expected to be lower in 2016, yet the slow employment growth may not be enough to boost the French economic recovery.

Australia added 10,800 jobs in April, supported by the record low wages yet the unemployment rate still stood at 5.7%. However, the statistics beat the market’s expectations at 5.8% and is expected to stay flat for a while. The creation of new jobs is mostly from part-time employment with a total number of 20,200 extra jobs while full-time employment saw a drop of 9,300. The data is seen to help the Reserve Bank of Australia feel less pressured on cutting the interest rates.

In the U.K., the employment rate was steady at 5.1% for the first three months of 2016. Both full-time and part-time employment increased, adding 44,000 more people in work. The Office for National Statistics revealed that the uncertainty over the EU Referendum shows no impact on the U.K. labor market. The first quarter saw a drop of 2,000 unemployed, yet there was a slowdown in the pace of hiring.

Hong Kong’s unemployment rate also came in steady at 3.4% in the three months to April with the a total number of 5,200 people was taken away from the unemployed population. Commenting on the latest figures, Matthew Cheung, the secretary for Labour and Welfare, said: “The near-term employment outlook remains overshadowed by the strong external headwinds and a slow-growing local economy. The weakening labour demand in sectors relating to trade, tourism and construction also warrants particular concern.”

Egypt’s workforce increased by 99,000 people in the first quarter of 2016, sending the jobless rate down to 12.7% from 12.8% of the previous quarter. Egypt aims to reduce unemployment to 10% over the next few years in the attempts to recover from the 2011 revolt which led to the collapse of Hosni Mubarak, the fourth president of Egypt.

In Africa, South Africa’s unemployment rate for the first quarter hit record high since 2008 at 26.7%. Construction and manufacturing were the two main sectors contributing to the rise of the rate. “South Africa’s high rate of [total] unemployment is largely due to a combination of the structural legacies of the country’s Apartheid period and very poor educational outcomes, which leave many young people unprepared for the labor market,” said Capital Economics’ Africa economist John Ashbourn. In 2014, the country had a youth unemployment rate of 52.9%, according to the ILO.

On myMarkets’ Impact widget at Sentifi, the buzz of the crowd talking about the unemployment event demonstrates the countries with the highest attention from these financial market participants.

U.S. appears to be the most talked-about economy in terms of unemployment, which is monitored very closely. The latest news claims that the number of unemployed climbed by 20,000, the highest of the year, in the first week of May. 160,000 jobs were created in April and the unemployment rate held steady at 5%. This number was less than expected, signaling further slowdown of the economy. A delay in a rate hike in June from the Federal Reserve is expected following the latest job growth data. 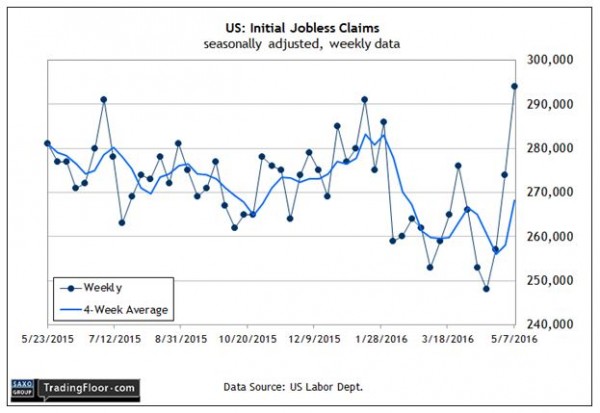 The employment growth of some economies for the first few months was quite in line with the analysis of the ILO. It seems that governments will need to put more efforts on their policy to improve the situation amid the global economic slowdown and uncertainty over some economic and political events.