In his latest effort to convince the public to vote to remain in the European Union, David Cameron, the U.K. prime minister, included increasing trade with India as a motivating factor. The Reserve Bank of India (RBI) Governor Raghuram Rajan also said that Brexit can be devastating news for India’s economy. The two messages are important addition to the crowd discussing about the impact that Brexit may have on India. 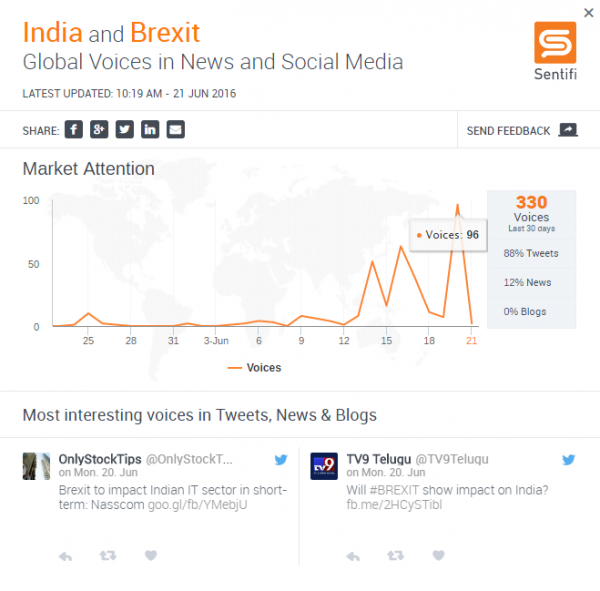 Cameron answered in the special “Question Time” show on BBC that the country needs to trade more with big economies like China and India, but not at the expense of cutting itself from the EU. Sharing the common thoughts with the British prime minister, the Chief Financial Officer of Tata Motors Ken Gregor said: “Remaining in the EU, our largest market, will increase Jaguar Land Rover’s chances to grow, create jobs and attract investment in future technologies.”

Facing the potential risks of the EU Referendum, Rajan recently vowed to do everything to moderate the market volatility in the case of Brexit. “I am not saying (there will be) no volatility, but once the initial bout or wave abates, people (will) look for good fundamentals,” he said.  The governor also announced that they have a set of various preparations and good policies to deal with the outcome.

Brexit and rexit both will impact Indian economy. Probably latter would have more direct impact.

#Brexit is the first real challenge to financial markets since PIGS crisis in 2012 & Draghis "will do what it takes"
Be wary,very wary

The Federation of Indian Chambers of Commerce and Industry (FICCI) had previously warned about the uncertainty for 800 India’s business operating in the U.K. and Europe with 110,000 employees if the U.K. decides to leave the EU. Yesterday, the National Association of Software and Services Companies (Nasscom) announced that Brexit will have a negative impact, which is expected to last about two years or more, on the $108 billion Indian IT sector. This is because Indian IT companies receive about 6%-18% of revenue from the U.K., which acts as a gateway for Indian firms to enter Europe.

Brexit to impact Indian IT sector in short-term: Nasscom https://t.co/f27yuTuviz

On the other hand, many people from India support Brexit because they believe leaving the EU can strengthen the trading relationship between the U.K. and India. The U.K. Employment Minister Priti Patel said that the EU membership was a barrier to the development of trade and investment partnerships between India and the U.K. At the beginning of May, SK Ghosh, chief economic advisor at State Bank of India, said that Britain’s expertise in cyber security and military technology can become the point of convergence under Make in India. Therefore, the loss of market in the EU for the U.K. can be compensated by the gains in India if Brexit happens. Yet the crowd did not completely agree with the point of view of the SBI and Patel.

Those who claim can deliver post Brexit UK-INDIA "Free Trade" simply hv no idea what they are talking about – https://t.co/Xr38RBzdPO