PepsiCo shares are in danger, according to analysts and traders alike, after CEO Indra Nooyi expressed her and her employees’ worries and concerns about the President-elect Donald Trump. Stick with Sentifi to see what fate awaits Pepsi shares as we will follow the company closely.

PepsiCo: Shares are feared to share the same fate with Macy’s

According to the CEO, the employees are in mourning ever since Trump won the U.S. presidential election. Concerns about women’s rights, equality for LGBT community and people from different races are at a high at the company. There’s also a rumor floating around that the CEO said Trump supporters should take their business elsewhere, which prompted a few traders to recommend people to sell the company’s shares before they plummet similar to Macy’s. The quarrel between Trump and Macy’s, which started in June 2015, has cost the company’s shares half of its value. 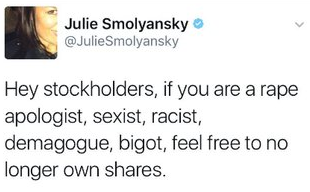 Since then, the company’s shares have nosedived 12.16 percent.

The pitch took place at the Kawasaki Heavy Industries Ltd.’s plant in Kobe, Japan. The rapid train technology of the Land of the Rising Sun is expected to be used in the construction of a 500-kilometer Mumbai-Ahmedabad route, which is scheduled to open in 2023. Kawasaki is building some of the most high-tech trains that are being used in Japan, and the country is lobbying for those trains to be used in six other routes in India.

The Danish toymaker had ended its relationship with the company’s newspapers Daily Mail due to its hostile stance on race, immigration and gender issues. The newspaper has also been under fired from the campaign group Stop Funding Hate since the EU referendum vote due to its coverage of inflammatory issues. Now, the company is afraid that more advertisers would follow Lego’s lead, which will complicate the company’s reputation and financial situation.

Owners of trucks and SUVs in the United States filed and won a lawsuit against the carmaker for the lack of proper rust protection in their cars. The issue affects about 1.5 million Toyota vehicles sold in the U.S. between 2005 and 2010. Aside from the fine, the carmaker also offered to fix the affected vehicles free of charge, and reimburse the customers who have already made the fixes at their own expenses.