Despite the weak profit forecasts, Sony shares had the biggest intraday jump since April 19 with 6% increase in Tokyo. The investors are positive about the sales of the PlayStation 4, the entertainment and the sensors needed for the company’s new technology products. 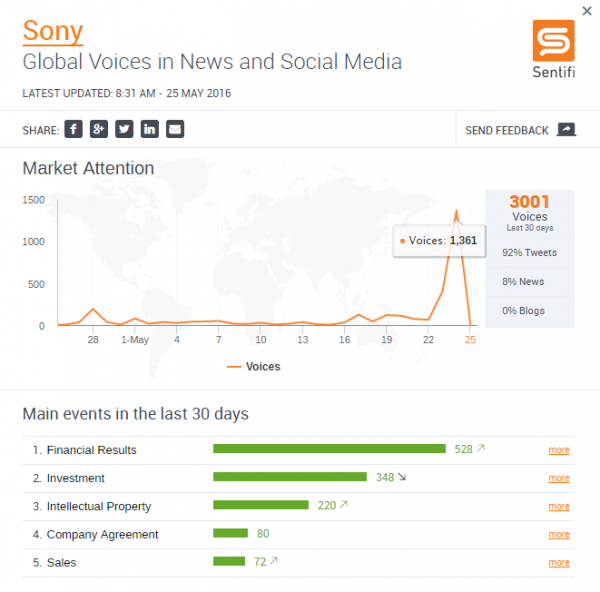 Sony screen at Sentifi showed uptrend arrows for all events related to the company’s latest forecast such as financial results and sales. In the report, Sony sales dropped about $4 billion and profits declined to $728 million. The loss was due to the Kumamoto earthquakes in April, which hit Sony’s image sensor manufacturing plant and caused a delay in operation for digital cameras and other devices. Sony’s sales in image sensors and camera modules for smartphones were also affected by Apple’s declining sales even though the company viewed this business stream as a pillar for its turnaround efforts.

Sony also canceled the plans to increase production capacity of image sensors and modules for smartphones due to the saturation in the market, which was partly responsible for the estimated loss of $366 million for the fiscal year ending March 2017.

However, Sony’s investors are still confident that the company’s video game business will cover up the loss from its image-sensor unit. Sony expects the sales of the Games and Network division to reach $15.3 billion. The worldwide sales for the PlayStation 4 is at 35.9 million by January 2016, and the console is expected to cross 50 million units sold.

Moreover, the new technology also helps the company’s business. Taking one step ahead of Microsoft’s Xbox One and Nintendo’s Wii U, Sony plans to launch its virtual reality headset in 2016. According to Jitendra Waral, a Bloomberg Intelligence analyst, the VR headset can help convert PlayStation owners into video subscribers who will pay monthly fees, which can boost sales and expand the user segment for Sony.