Nikesh Arora’s Journey at SoftBank Came to an End

SoftBank rose to the top of Sentifi Attentions list today with over 1,500 voices discussing the departure of its president Nikesh Arora, whom decided to leave the company abruptly despite being a heir apparent at the Japanese Internet and telecommunication giant.

Arora’s decision is tied to the announcement of CEO Masayoshi Son where he said he would stay as the executive chief for another five to 10 years. However, the former Google executive faced much pressure from SoftBank’s investors leading to the decision. Have a look at Arora’s journey from before being Google’s executive to his time at SoftBank. 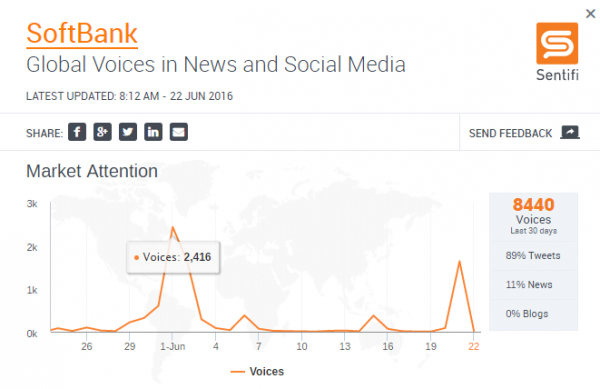 Nikesh Arora began his career in 1992 as vice president for Fidelity Investment, a financial services company. He was also the founder and CEO of T-Motion, which was later merged with T-Mobile International in 2002, before he joined Google in 2004.

At Google, Nikesh Arora began as the president in charge of sales, marketing and partnerships for all markets in Europe, Middle East and Africa. After a decade, he became one of the four most important people at Google after taking the position of chief business officer. He started working as a senior advisor for private equity firm Silver Lake since 2007.

Arora left Google in 2014 to join SoftBank Group, the second largest public company in Japan at the time, as the vice chairman and head of the Internet and media investment. The Indian-born executive then announced two big investments in India firms: $210 million in the ride-hailing service Ola and $627 million in the e-commerce firm Snapdeal. In total, SoftBank had invested nearly $2 billion in six Indian companies. The abrupt decision of the SoftBank president sent shock waves to India’s startups, investors and entrepreneurs.

Don't follow startup scene all too well but to me Softbank investments in India look overrated, aimless. And Nikesh didn't bring any clarity

Why o why? That's a big setback for Indian startup ecosystem. Best wishes and hoping even bigger impact next. 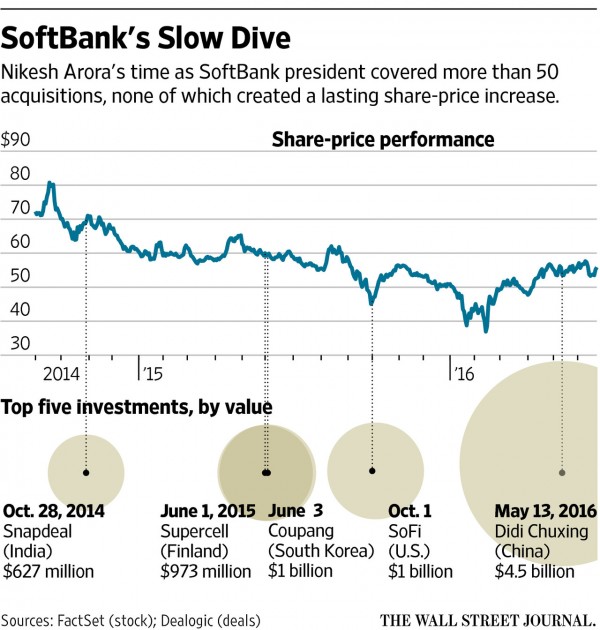 However, according to Ashish Gupta, managing partner at Helion, Arora’s departure from SoftBank will not impact negatively on India’s startup ecosystem, but it will slow down the company’s exploration for business opportunities in India.

After one year at SoftBank, Arora became the first president of the company as Masayoshi Son spoke about him at the appointment meeting: “He is 10 years younger than me and he has more abilities than me.”

On his journey to become the heir apparent at SoftBank, hand-picked by Masayoshi Son himself, it was impossible for Arora to please everyone at the company. The tension peaked when a group of SoftBank’s investors sent an 11-page letter to the board asking for an investigation on Nikesh Arora. He was accused of having a conflict of interest because of his advisor role at Silver Lake equity firm which could have led to his poor investment performance and questionable transactions at SoftBank.

While a committee cleared Softbank's Nikesh Arora of charges levelled by an investor group, doubts over conflict of interest linger

"The succession mess leaves SoftBank and its mercurial founder harder than ever to read" https://t.co/Aq7YSFAzzG

SoftBank called the letter “unsubstantiated allegations” from “unidentified shareholders.” The company also protected Arora’s reputation by saying that they had complete trust in his management. Mr. Son also showed support publicly to Arora by acknowledging that the president would do great things for SoftBank in the future.

The investors’ pressure finally pushed the India-born president out of the company, but Arora said that he planned to remain as an advisor to SoftBank. Mr. Son also praised Arora for his deal-making decisions. “I learned from him (Arora) the importance of not only investing, but also getting returns.” the Soft Bank CEO said.

Masa 2 continue 2 be CEO for 5-10 years, respect that. Learnt a lot. Clean chit from board after through review. Time for me to move on.