German chemical company Bayer said in a short statement that its executives had met recently with their Monsanto counterparts “to privately discuss a negotiated acquisition” of the specialist in genetically modified crop seeds. The takeover would create a giant seed and farm chemical company with a strong footprint in the U.S., Europe and Asia, combining two businesses with complementary geographical focus. 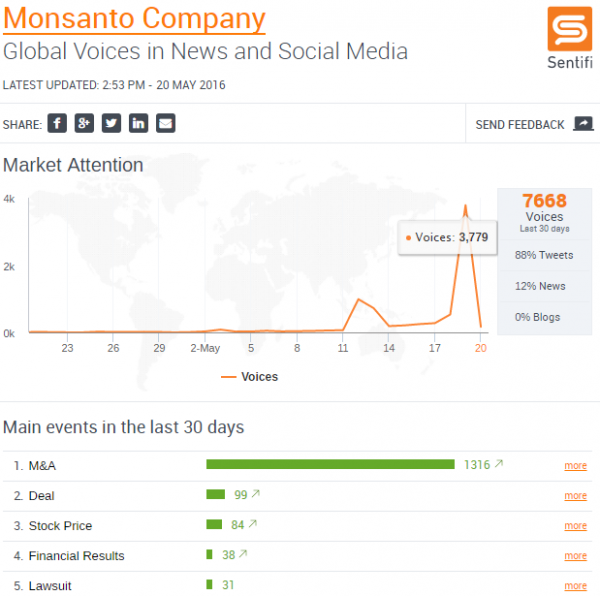 While Monsanto investors welcomed the news and the stock price increased by 4%, Bayer shares fell by over 8%. So the question arises how risky would this acquisition be for Bayer and what impact it would have on the company’s image. The Monsanto Company has been reeling due to the weight of protests, bad press, and backfiring technology, including damage caused by superpests and superweeds, in recent years, as well as the spring 2015 WHO declaration that glyphosate is a probable human carcinogen.

On May 21, 2016, in hundreds of cities around the globe, the famous March against Monsanto protests will take place again. It is an international grassroots movement and protest against Monsanto corporation who is specialized in producing genetically modified organism. The first demonstrations against Monsanto took place on May 25, 2013, in between 330 and 436 cities around the world with up to two million participants and has become yearly ever since. If Bayer takes over Monsanto will the crowd be demonstrating against the new company? Will there be a March against Bayer next year?

Additionally the bid would likely be above Monsanto’s current market valuation of $42 billion, making it the largest-ever German takeover of a foreign company. The question is if the antitrust authorities at the U.S. Department of Justice and the European Commission will approve the creation of such a huge and powerful company.