Did Alibaba Break the M&A Rules?

During this week,  the big news portal covered topics about Alibaba including the suspension of its role in the International Anti Counterfeiting IACC, the cancellation of Jack Ma’s speech at the IACC Conference and the company’s latest vow to use big data to keep fake brands off its online marketplaces. However, there’s an issue about mergers and acquisitions of Alibaba that was overshadowed by the topics about counterfeit wars.

The myEvent tool on Sentifi myMarkets showed that Alibaba had the most number of messages related to the M&A topic but it was not about any latest deals the company won. The crowd discussed more about the healthcare acquisition that Alibaba had 2 years ago, which was discovered to have broken the rules by Hong Kong regulators.

According to Takeovers and Mergers Panel of Hong Kong Securities and Futures Commission, the second deal was made under favorable conditions which were not extended to all shareholders. This was a clear breach of the Takeovers Code.

Alibaba said it would review the panel’s ruling and believe that it has complied with the code. The company also showed a 533% increase in Alibaba Health shares since the takeover, which proved that no shareholders were unfairly affected. 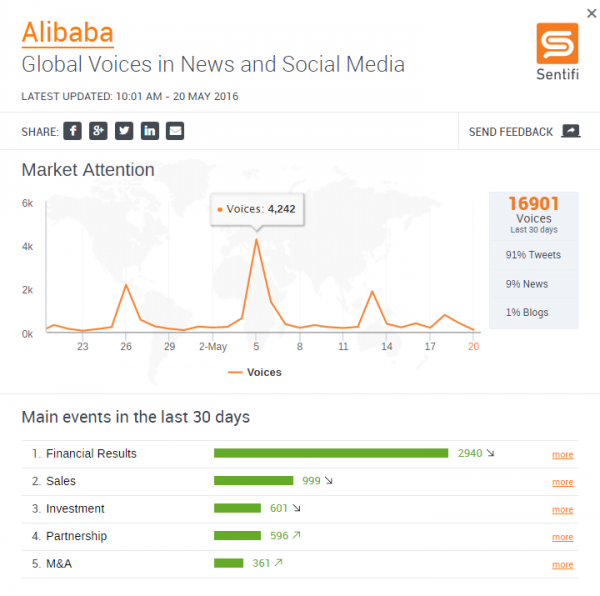 “Partnership” event is also trending on Alibaba screen after the deal between Alibaba’s affiliate Ant Financial Services and Samsung Eletronics in mobile payments. Samsung’s mobile payment service, Samsung Pay, will work with Alipay to extend its reach in China’s market, which the company had struggled to grow in recent years. The deal can help Alibaba expand in foreign markets, which aligned with the company’s priority.