Can Tencent Keeps Up Its Good Performance?

Tencent had another good quarter with a 33% increase in net profit and 43% increase in revenue, which reach 32 billion yuan. But the company’s stock fell the most in three months following the company’s warnings on advertisement business performance. The statement, which caused the stock to go down 2.9% to HK$156.50, came at the time when many investors and analysts are betting on advertising as the engine to support Tencent’s growth this year. 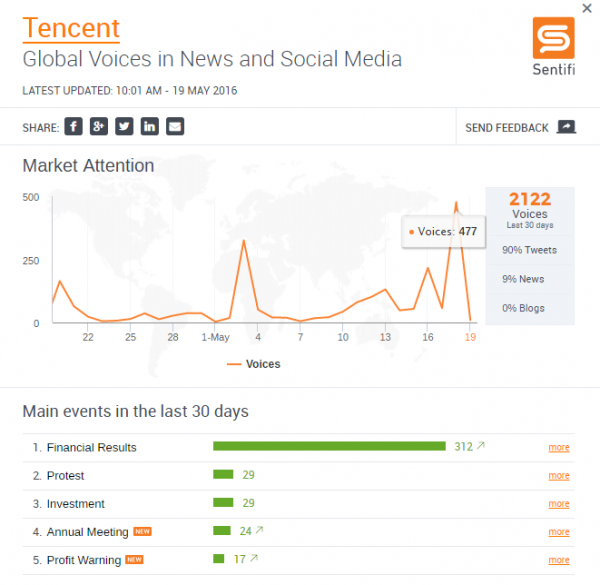 This quarter’s ad revenue increased 73% to 4.7 billion yuan, but the growth rate was slower compared to last quarter’s result where ad revenue doubled to 5.73 billion yuan. Tencent President, Martin Lau, expressed his concerns about the ad business revenue saying that the company might face more challenges due to the uncertainties in China’s macroeconomic environment.

However, a potential decrease in ad business is not the only concern Tencent had. Another main revenue stream of the company, online games, also showed signs of decline in number of users even though the Q1 revenue increased 28% to 17.09 billion yuan.

Tencent’s online games included many types, but the company was particularly successful in the Massively Multiplayer Online Game (MMOG) genre where thousands of users play simultaneously. The revenue came from charging players for better virtual weapons and extended features.

Tencent’s data showed that users’ average spending in MMOG genre was about 445 yuan which doubled the spending on smartphone games and casual games such as sports, racing and shooting games. But Tencent now saw a 35% drop in number of users to 1.5 million users, which signaled a shift in gamers’ taste into other game forms. In this quarter, Tencent also released new smartphone games such as CrossFire Mobile, Honor of Kings, etc. Despite the slower growth rate compared to last quarter, Tencent is still the leader in game revenue in all Asian companies.

Here is a look at the top 10 public Asian gaming companies.

Tencent leads the way of course. Netease are third. pic.twitter.com/XCT5BOVYtH