Burberry Is In Trend. Guess Where?

Burberry might not be trendy in fashion now, but in financial crowd, it is.

It was a tough 12 months for Burberry as the British luxury fashion retailer posted a 10% decline in full-year pre-tax profits to £421 million.

The fall in purchases from wealthy Chinese tourists as well as the weak demand in Hong Kong had taken their toll on the top fashion brand, adding more headache for the Chief Executive Christopher Bailey.

“There is no doubt last year has been challenging for the industry because of geopolitical concerns and changing dynamics in luxury consumption that have created a different climate than the one we have experienced in the last decade,” Bailey commented following the results of the company. Burberry has been aware of the profoundly challenging environment since last October when it warned about the slowdown in China.

Not only Burberry but other luxury brands are also suffering the same problem following the changes in market conditions. In Hong Kong, the 2014 pro-democracy protests which resulted in the significant drop in rich Chinese tourists from the mainland have marked an end to the blooming growth of these brands.

The concerns over the slowdown in its global business have urged Burberry to implement cost cutting plans for the future. The high-street fashion retailer plans an annual cost reduction of £100 million by 2019 through slashing jobs and narrowing down its product range by up to one-fifth. The company also promises to simplify its operational processes across the globe. Online sales will be improved along with store sales.

Shares fell down 3% following the news. Burberry has seen its stock price fall 38% since May 2015.

Burberry also made an announcement on a £150 million share buyback for the first time in many years which will start in fiscal 2017.

At Sentifi, signals for Burberry have increased significantly over the last 24 hours with nearly 1,500 voices talking about the company’s financial results, cost cutting, share buyback, stock price and sales. 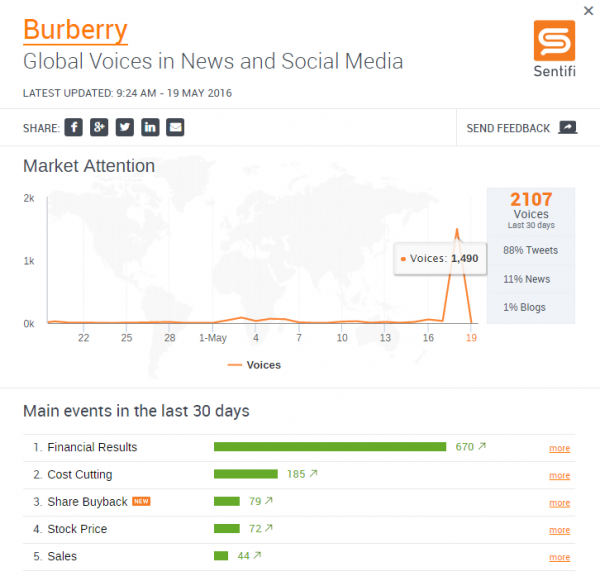