Brexit Brings out the Best of Bitcoin

The media’s vocabulary to describe Brexit is rich, albeit gloomy. Uncertainty. Risks. Volatility. Nightmare. Regret. Crisis. Recession. Instability. Bitcoin is discussed on the subject of Brexit because this disruption in the European Union specifically and in Europe generally has brought the best out of bitcoin.

This is a fact that everybody knows. Bitcoin is a safe haven in the pre-Brexit world as well as the post-Brexit world. But thanks to the crowd, Sentifi is able to capture very vividly why bitcoin is such a stable currency during this turbulence and future ones. 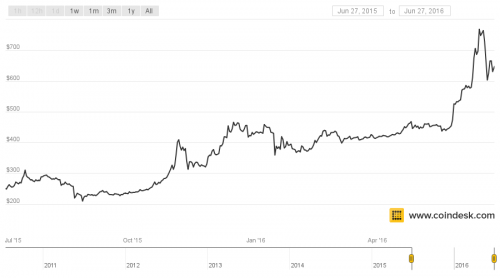 Over the course of a year, the value of bitcoin steadily increased until it hit record high the week before the EU referendum. On the other hand, the pound hit a 30-year low on Friday when “leave” won out with 51.9% votes. Through all that commotion, bitcoin was and has been nothing but stable.

Crypto currencies have always been praised for their futuristic characteristics. They have authentication to security and verification to transaction processing. They are not a centralized currency, but a decentralized one immune to rate hikes or negative interest rates or any other policymaking concepts.

Perception determines the value of bitcoin. Perception is based on the public’s interest in the currency, which then dictates its supply and demand. This flexibility shields bitcoin from economic and financial turmoils. Just look at the pound and other currencies. The pound has lost so much value, whereas the yen and the swiss franc, which are also safe havens for investors, have seen their values going up.

The following insights are captured by our Brexit monitor, and you can see how Brexit helps revitalize bitcoin.

Heavily dependent on technological infrastructure, bitcoin is still far from mass adoption. It’s safe to say bitcoin is as good as the infrastructure itself. It will take many trials and time before bitcoin can reach a true breakthrough moment.

Brexit may mark the end of the U.K.’s membership in the European Union, but it may signal the beginning of a new era for bitcoin.