Brexit Briefing: Pound’s at 30-year low as Brexit is Leading the Referendum Votes

The result of the historic referendum on the U.K. membership in the EU is only hours away and the declarations from local authorities keep coming out showing that the Leave votes are leading the way. Market volatility is climbing and the pound is inevitably the most volatile and most talked-about amid the chaos. 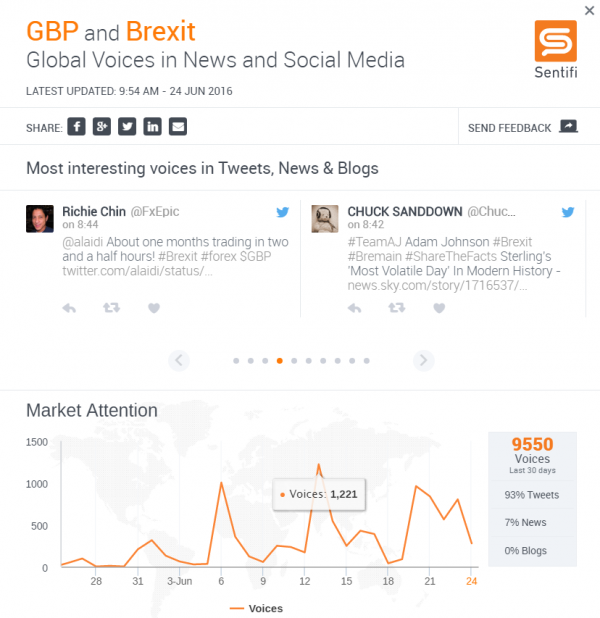 After hitting six-month high before the voting day on the ease of Brexit fears, the pound has plunged to its lowest level in 30 years following the updated results from the referendum. 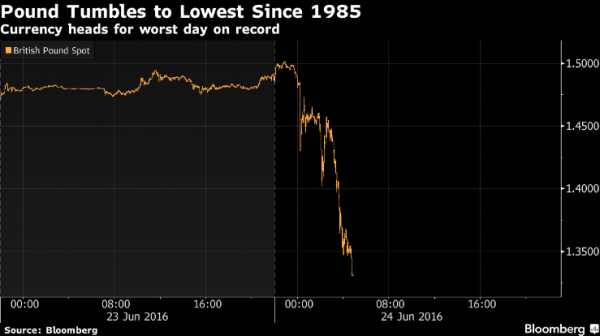 The Brexit concerns have re-emerged and are deeply felt in the financial markets. The crash of pound looks severe and wild for an developed economy.

Sterling is CRATERING – never seen anything like this in an advanced economy before pic.twitter.com/YiJV1Ua8zY

On his remarks, payments company World First’s Chief Economist Jeremy Cook said that the pound was dying and the market expects a collapse of the currency if a Brexit happens.

On Sentifi’s Brexit Briefing widget, voices about the pound in relation to Brexit have reached nearly 1,000 within the last 24 hours. On the signals, the Bank of England is expected to intervene to protect the pound in the morning when the result is announced if the Brexit campaign prevails.

John McDonnell, shadow chancellor, he told BBC he expects the Bank of England to intervene in the morning to protect sterling. #BREXIT

If #Brexit happens, #BOE will have no choice but to cut rates, weighing on the #pound: Fullerton Fund Management #EURefResults

#BoE, #Fed, BoJ and #ECB might need a little phone hookup sometime in the next few hours#forex

A lot of Britons queued up outside the foreign exchange bureau in London two days ago exchange their pounds for euros and dollars because they weren’t too optimistic about the future of the pound head of the referendum.