After the Fed emerged as the most talked-about central bank in relation to Brexit yesterday, the Bank of England (BOE) has taken back the throne on its latest warnings over Brexit. 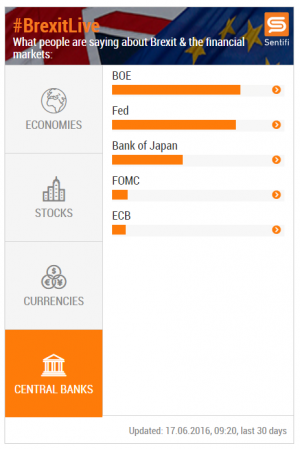 Based on the signals from the Brexit Briefing tool, the fresh warning from the BOE indicates how Brexit will hit the U.K. severely in terms of economic growth, cause the pound to depreciate, and present a risk of sending the global economy into chaos. The U.K. financial markets is likely to be immediately exposed to the outcome of the EU referendum.

The BOE still keeps the interest rates on hold at a record low of 0.5%. The central bank puts plans to secure the banking system in the event of a Brexit into discussions. The BOE said it would use its tools to achieve the inflation target whether the U.K. would stay or leave the EU.

Although the BOE stated that the bank did not heavily intervene in the referendum campaign, its governor Mark Carney has received criticism from the Brexit backers for the bank’s unnecessary Brexit warnings. 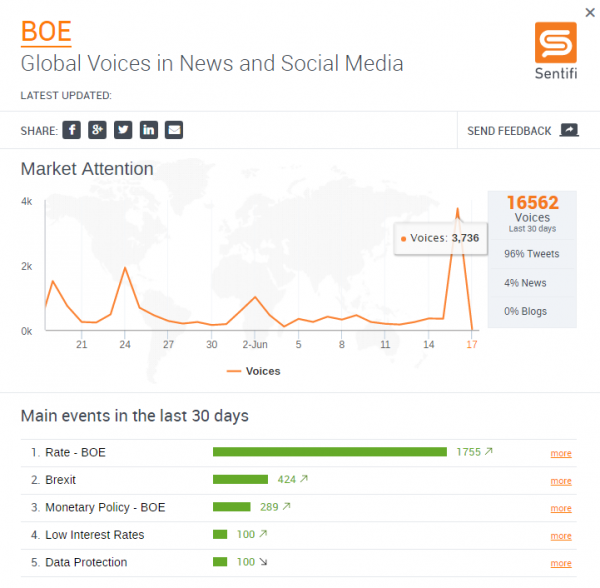 Elsewhere, Deutsche Bank Chairman Paul Achleitner also warned that a Brexit would become an “economic disaster for the U.K. and a political disaster for the EU,” while analysts at Keefe, Bruyette & Woods said JPMorgan Chase and Goldman Sachs would be likely among the U.S.’s largest banks suffer the most from a Brexit.

Our signals also show that in the most recent survey of 3,394 business owners and finance directors in London and Scotland undertaken by Charterhouse Research consultancy, 35% of the respondents fear that the U.K. leaving the EU will harm the economy.