Pound again tops our most talked-about currency list in run-up to the EU referendum on June 23. The currency climbs higher in early Asian trading after the most recent poll results over the weekend showed that voters swang back to “Remain.”

The YouGov survey published last Thursday and Friday had 44% of the respondents on the Remain side and 43% wanted to leave. The poll by the market research firm Survation followed on Friday and Saturday with 45% voters wishing the U.K. to stay in the EU and 42% thought Britain would be better off abandoning its EU membership.

The latest poll results could be affected by the death of Jo Cox, a Labor Party Member of Parliament who supported to keep the U.K. in the EU. She was shot in the street on Thursday. However, YouGov said the increase in percentage of people supporting the Remain vote was due to the worries on the economic impact rather than the murder of Cox.

The pound has been showing absolute volatility to Brexit and this latest movement is not an exception. Although it looks like that Brexit fears have loomed, we have still got three days left till the referendum. Some discussions among the financial crowd still indicate the dark future of the pound in case of a Brexit. 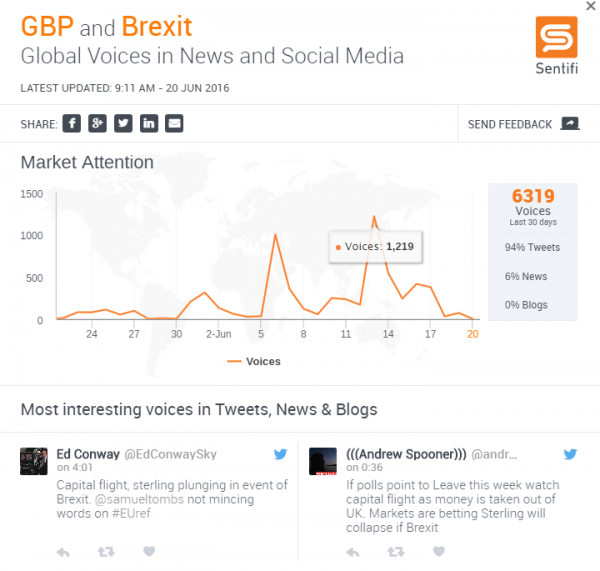 Updates on the Brexit Briefing show new topics affected by the event of Brexit. Deutsche Bank and Morgan Stanley dominate the list of stocks mentioned along with Brexit in the past seven days. The tool listens to 2.8 million of financial market relevant voices on news and social media and analyses the most talked-about economies, stocks, currencies and central banks in relation to Brexit.