The incident of the EgyptAir missing plane MS804, which made the headline after disappearing and later being presumed crash, spells more distress for the already-trouble airline industry.

The European airline industry has been plagued by the effects of terrorists attacks in Tunisia and Brussels. Some of the largest European airlines have witnessed their profits plummeting, which calls for revision in their growth plans. 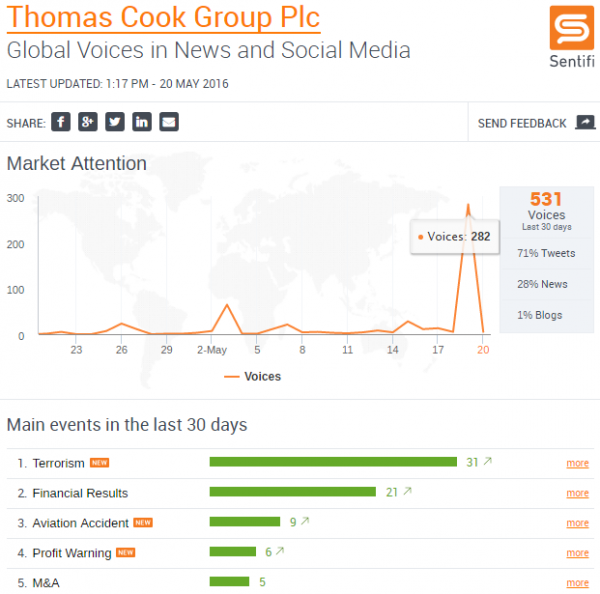 Thomas Cook shares plunged 19% to a three-year low after holiday company warned bookings had fallen due to terror scare. Tourists decide to cross out Turkey, Tunisia, Egypt and Brussels as holiday destinations, contributing to a 5% decrease in demand compared to last year.

Thomas Cook is not the only victim of the terror scare. It’s a widespread problem as IAG, the owner of British Airways, also saw its shares fall 5%. Germany’s Lufthansa lost 1.2% and Air France lost 1%.

In light of the falling demand, Thomas Cook adjusted its earnings to the lower end of analysts’ expectations. Credit Suisse even took some collateral damage as it cut its forecasts for earnings per share by 21%.

To cope with the softer demand, Thomas Cook increases the number of offered flight deals, while IAG plans to limit capacity-growth plans in the short term.

Their American counterparts are not doing so hot, either. Bloomberg U.S. Airline Index got hit by the EgyptAir incident, falling 1.8%, with Boeing losing 2.22% in the value of its shares.

Is flying more dangerous than ever? https://t.co/EGjCvT7Ag5

The incident has raised a concern it would make Americans reluctant to travel to Europe as the summer traveling season is approaching.

“I think the EgyptAir crash is the principal driver of the declines,” said Jack Atkins, an analyst at Stephens Inc. “Given the flight originated in Paris, it raises additional concerns about terrorism in Europe right at the start of the Summer travel season.”

That’s particularly troublesome due to the high profitability of the U.S. to Europe market. In fact, it’s one of the most profitable markets for U.S. airlines. For instance, trans-Atlantic flights were accounted for 15% to 20% of Delta Air Lines‘ total revenue.